Ouch! She's gone and tagged me, the effervescent Shelly from Shells and Beans. The task was, to finish the sentence starting with 'Real Mums......' A photo was also required to go with the sentence. Go take a look at Shelly's photo and caption - both are brilliant and the caption is so, so true.

Here is my version of the meme:

Real Mums are making it up as they go along! 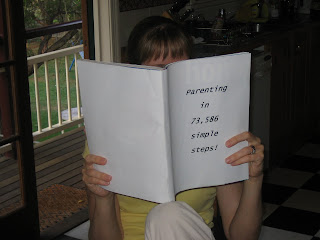 Now, just because I am a sharing type, I am going to tag Franny, Heather and Kerri (and of course you strange North Americans will have to say 'Real Moms.....'. Except for Kerri, who, being Aussie born but living in the US for many years, may be torn and confused!) I am looking forward to some great Mommy photos and mothering wisdom!

as it is in heaven

In this household - the Fatty/Jelly household - there are differing views as to the existence or otherwise of heaven. It is a topic we generally leave alone; Fatty and I agree to differ. In fact, neither of us are entirely sure of our beliefs and thoughts on the matter, so it is easy to not only respect, but even understand, the other's point of view.

The arrival of children, who are now old enough to ask questions about God/heaven/hell and the like, has made things a little trickier. A little trickier, but not too tricky. We answer the questions by saying, "Well, Mummy believes that......., but Daddy believes that...........". We inform them, "Some religions believe .............., and some believe........". Our children seem to accept this. I sometimes think it could even be a good thing. Laura and Benjamin will never be told didactically, This is how it is. They will form their own opinions over time.

It amuses me to hear how these two children have then taken this mish-mash of parental instruction, and come up with some concepts of their own. Laura thinks heaven has invisible gates, and that people sit around on clouds. Ben thinks heaven involves dessert for every meal. Both kids are quite keen on the concept as a whole.

Last night, Laura, who tends to be more contemplative on the subject, commented, "I wish I would nearly die - then I could see heaven, but I'd still be alive." My throat felt tight for a moment. I wished fervently and silently that Laura's wish would remain unfilled for many years to come. Laura burbled on, adding, "You know - how some people who get very, very sick get to see heaven, then come back? I heard that it can happen". Fatty was answered that yes, there were people who believed they had seen heaven, who had almost died but then been revived. Laura nodded. "Yes, that's what I'd like to do". I resisted the urge to say, "No, no, no, NO you don't". Fatty and I met each others' gaze. The mood at the kitchen table was a tad sombre, to say the least.

Thankfully, our other child is less interested in the spiritual significance of heaven, and more interested in toilet humour. Just when I couldn't stand another minute of 'heaven talk', Benjamin came to my rescue, offering this thought on the matter:

"Laura, you have to do lots of farts to take off to heaven".

I'd just like to clarify that this is a belief held solely by my son.
Posted by Jellyhead at 6:29 PM 14 comments:

I'm sure you're all familiar with trolley torment. It's a common phenomenon. You rush to the supermarket, you grab a trolley randomly, and then spend the next half an hour careering wildly around the store, seemingly without direction. Literally. Because the damn trolley has a turned wheeel, and when you point the trolley straight, it goes left. Or right. Or if you're particularly unfortunate, it rotates in a full circle, so that you end up back in the same spot, still in front of the breakfast cereals. It's maddening.

These days, I like to think of myself as somewhat of a supermarket expert. After all, I was a Grocery Store Shopping Assistant to my mother for years. Now, I am the Designated Shopping Person in our family. I do this job every week. I know about supermarkets. Why, then, do trolleys still defeat me? What is it about their sneaky conniving ways that has me beat?

Early Sunday morning, I drove serenely to the local supermarket. I was looking forward to an hour of quiet, to be honest. For one whole hour, I would cruise peacefully up and down aisles, stopping occasionally to flick through a magazine. Any screaming kids would not be mine to deal with. In any case, it was too early for most parents to have wrangled kids through dressing and breakfasts and into the car. The store was full of old folks and me. Ahhhhhhhhhhhh.

I may have been dreamy, but I still was alert enough to select my trolley carefully. I pulled it from the stack. I tried it forwards. Tried rolling it backwards. Tested a quick turn to each side. Perfect!

It was sometime during the viewing of Aisle 3 that everything unravelled. As the trolley filled with groceries, it began to move against my will. As I pushed straight ahead, the trolley would surge obediently forwards a few metres, then angrily pull to the left. As I tugged it forwards again, it swung wildly to the right. I swear it had a mind of its own. This was a trolley with intent, and I'm talking evil intent.

As I fought to steer the trolley down each aisle, I began to sweat lightly. I grimaced as I wrenched it away from shelves of teetering tins. I apologised to a frowning elderly lady as the trolley suddenly lunged at her. I laughed and shook my head, explaining, "This trolley is crazy!". The old lady silently glared back. It was evident where she thought any mental instability lay.

The worst thing was, there was no way to predict what this damn critter (i.e. the trolley) would do. Its behaviour was completely inconsistent. It would lull me into pushing in a normal fashion, then veer off at almost ninety degrees. I tried to compensate for the left veer, but would end up still going left. Or right. Never straight. It seemed to defy all laws of physics. Not that physics is my strong point.

I'm just saying - watch out for these trolleys. They don't reveal their true natures until you begin to relax. They don't show the wild whites of their eyes until you are committed; until the trolley is already half full. All the pre-shop rolling and testing will not help if you don't try to sense the trolley's aura. You must stand next to it. Pause. Wait for any malevolent vibes. Trust your trolley instincts.

Good luck, my friends. May the trolleys be kind to you.
Posted by Jellyhead at 6:56 AM 13 comments: 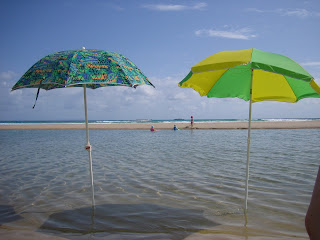 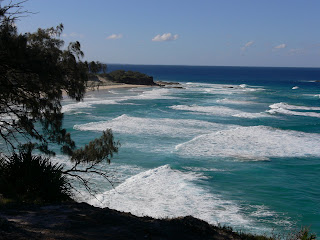 So, I'm back already. Back and feeling a little post-holiday bluesy, which I guess is to be expected. The beach was sunny, sandy, warm and wet when required - just heavenly. I ate a lot of gelati, too. The last day they had Pina Colada flavour - how good is that?
*
It wasn't all idyllic, because no holiday seems to be complete in our family without someone falling prey to some sort of stomach bug. However, this holiday, it was only Fatty who was afflicted, and only for the last couple of days. I kept the children away from him, and the kids and I gaily continued to swim, eat ice creams and go for shell-seeking walks on the beach. Occasionally I checked on Fatty before swanning off to our friends' unit to drink wine on their balcony. He needed his SLEEP, alright? he he.
*
The dog has been instrumental in cheering me up. I left the holiday unit feeling a little dejected (not to mention tired, from having done every bit of packing, washing and cleaning unassisted by The Germy One). But when we arrived home, there was Millie - all waggy, gallolopy, and happy licky. If you've never owned a dog, and never experienced a dog's welcome home, you have missed something glorious. Milllie may be a thieving scoundrel (just to help us get back to our normal routine, she stole Laura's crackers and cheese yesterday afternoon, right off the table) but damn she is a fine old hound.
*
I'm off to start washing the 372 loads of dirty clothes and linen. In between hanging stuff, I will come by your blogs, catch up on your news, and say hello to you!
*
XO Jelly
*
PS Why won't Blogger/Google let me have spaces between my paragraphs anymore? Why must I insert silly little asterisks if I want to denote a new paragraph, (which I like to do, especially if the previous paragraph runs to the end of a line?) WHY, WHY?!!
Posted by Jellyhead at 7:08 AM 16 comments: 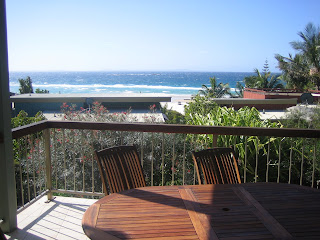 I can be a bit of a Pollyanna. I can be hugely Pollyanna-ish, truth be told. Now that I am married to Fatty, I tell myself that I have to be the cloud-silver-lining seeker, to counteract Fatty's natural state of discontent and ingratitude (Did I mention I am prone to exaggeration, as well as Pollyanna-ism?)
I'm telling you about my Pollyanna tendencies because today, as I prepared for our week away at the beach, the thought occurred to me that I was grateful we didn't live at the beach all year round. I am so excited every time we go to this same beach unit, at the same beach, with the same friends - and somehow I don't think I'd feel the same anticipation and thrill if we lived there always.
So tomorrow we head off for seven days of sticky sunscreen, ice-creamed elbows, warm whooshing waves and sandy sheets at night. This Pollyanna is takin' a break!
Look after yourselves (and don't forget to find those silver linings!)
Posted by Jellyhead at 8:25 PM 13 comments:

I saw them at the corner of a busy intersection. A dark-haired man, in a blue business shirt, and a schoolboy in school uniform and hat. They caught my eye before I'd even reached the corner. The man was kneeling, smiling, with his arms wrapped around the boy, who in turn was tightly hugging back.

I was driving with the music turned up ridiculously loud, blasting my ears like a teenage hoon. I was buoyant - celebrating my escape from the clutches of domesticity, free of the demands of my children for an evening. And there they were, these two, child and man. My gaze was drawn to them, and I stared as I drove past; peered in the rear vision mirror when I had rounded the corner. They were still embracing.

As I continued, I wondered about the man - was he the boy's father? It had appeared so. I wondered what had prompted the hug. Was this a long-awaited reunion? Were they celebrating an achievement in the boy's life?

I was intrigued by their story, but something else about this scene had fascinated me. What had made me stare, and keep staring?

It was the kneeling. It was the fact that a grown man, dressed for work, at a busy intersection, cared so little what anyone else thought that he knelt and hugged his son. He couldn't care less if he attracted glances. He couldn't care less if the knees of his trousers got dirty. He didn't pat a shoulder, cuff the side of his boy's head, or simply smile. This man got down on his knees and gave his son his whole self. It was a beautiful sight.
Posted by Jellyhead at 8:57 AM 13 comments: 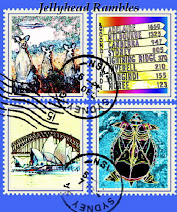